Interview with Hayat after the Global Forum on Migration and Development 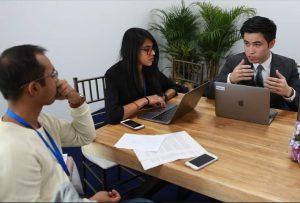 Hayat (far right) at the Youth Forum at the Global Forum on Migration and Development on 20 January in Quito, Ecuador.

1. Tell me about yourself

I’m an advocate in the Human Rights space, particularly for refugees and youth. I live in Sydney and I am originally from Afghanistan. I am a fourth-year student studying a Bachelor of Arts in International Law and Global Governance and International Relations and I’m the current Chair for the Youth Working Group at Asia Pacific Refugee Rights Network (APRRN) and Asia Regional focal point at the United Nations Major Group for Children and Youth (UNMGCY)

2. How have you been involved with MYAN? (previously and/or currently)

3. Can you tell me more about the ‘Youth Forum at the Global Forum on Migration and Development (GFMD)’ event that you attended?

This event was held for the second time and brought together about 50 young people, including grassroots activists, in migration and development. It was held on 19-20 January in Quito, Ecuador.

The main purpose of the event was to discuss youth-specific challenges in regards to migration and development around the world. It was a platform to bring like-minded people together and stay connected after the event too. Young people were broken up into groups to discuss different issues.

The event included representatives from UNICEF,  the Global Forum on Migration and Development (GFMD), and UNHCR I believe.

4. Why do you think it is important for young people to attend events like these?

Migrant and refugee voices must be heard and they must be involved in decision-making processes. Youth and Children make one-third of the international migrant population and we should be included to speak and advocate on issues matters most to us.  I participated in the UNMGCY Youth Forum because I want to voice the issues important to me and other young people and a topic which I am passionate about. I want to raise the concerns and voices of voiceless people. I wanted to ensure that we are included. The phrase that exemplifies this for me is “Nothing about us without us.” Young people need to be part of the conversations and decisions that affect them.

I had multiple hats on. I was the part of the organising team of the Youth Forum at GFMD and also a participant. I was also there attending as a representative from the International Detention Coalition (IDC) and I firmly believe no one should be detained no matter what and that there are alternatives to detention.

6. What were some of your key learnings?

Although I think there has been a lot of work in advocating for children and youth in decision-making processes there is more to be done. Voices of young people are still missing in parts of the world. People and organisations are changing though for the better and are including more young people in their forums and discussions. NGO’s at the event were showing the support and encouragement to continue this approach. An example was the Ambassador of Dubai who spoke at the event and emphasised that more young people were needed in these discussions to better inform the solutions. The Youth Forum was an illustrious place to start for a more promising global youth action on migrant and refugee you, particularly in the areas of advocacy and involving youth in the decision making process.

7. What was the biggest highlight?

Connecting to other young people who were like-minded from countries such as Brazil, Venezuela and several countries from Africa, EU, Asia Pacific. Also, one of the greatest outcomes of the Youth Forum was that the United Arab Emirates will be the next host for the Global Forum for Migration and Development GFMD to have the voice of the young people as part of the GFMD.

8. Are there any actions or things you will be doing as a result of attending this event?

I will continue my work and advocacy to be the voice of young people and also continue working with the National Manager of MYAN, Nadine Liddy, on Asia Pacific consultations organisations that may happen later in 2020. These consultations will focus on addressing the challenges that young people from refugee backgrounds face.

Sign up to receive MYAN’s eNewsletter
Interview with Zahra2020, YAN