OUR WORK WITH YOUNG PEOPLE

MYAN supports the development of young people’s leadership skills and networks to create change in their communities and influence the national and international agenda. We do this through our national Youth Ambassadors Network (YAN), our bi-annual national multicultural youth summit, FUSE, supporting young people to engage in advocacy opportunities with government and in national fora, and hosting the Refugee Youth International Leadership Scholarship.

The YAN to MYAN Australia was established in 2015 as a key mechanism for young people from across Australia to engage directly with, inform the work of the MYAN and promote positive change in the lives of young people from refugee and migrant backgrounds across Australia. Appointed through a selection process, the YAN are young leaders working within their state or territory and in the national arena through MYAN Australia. The YAN meet regularly through online platforms and annually in person. The YAN also plays a central role in planning and delivering FUSE (MYAN’s bi-annual national multicultural youth summit).

Supported through MYAN Australia and our state and territory partners, YAN members are active advocates and actors working to influence the national agenda for young people from refugee and migrant backgrounds.

The YAN are not representatives of all refugee and migrant young people in their state or territory, but provide a perspective of young refugee and migrant Australians to MYAN Australia. They also work on practical activities within their state or territory and serve as advocates, amplifying the voice of others, in a range of national and state/territory forums. I am thrilled and humbled to be a part of the YAN representing NSW. I am honoured to learn from diverse young people and ensure their voices are heard and taken seriously. I have had wonderful opportunities to volunteer for MYAN and Bankstown Intensive English Centre, and for RacetoRaise fundraising for a Sri Lankan village. I have also been selected to attend the University Scholarships leadership Symposium and the Peace Summit at the United Nations. I am eager to grow in this role and hopefully create a meaningful, sustainable impact with the YAN cohort.

“When I dare to be powerful, to use my strength in the service of my vision,
then it becomes less and less important whether I am afraid.” - Audre Lorde

I am a proud Samoan/Chinese-Fijian passionate about the power of storytelling in creating social change. During my studies, I played a key role in establishing The University of Queensland’s first ever South Pacific Islander Association (UQSPIA) and was the first female to be elected president of the Asia Pacific Youth Parliament for Water, held in South Korea in 2017. Since attending FUSE 2019 I have joined the Multicultural Youth Queensland Council advocating for young people from migrant and refugee backgrounds.

Today I am serving as the Brisbane Coordinator for a group of young community leaders known as the Pacific Climate Warriors. By elevating the stories of those on the front-lines of the climate crisis, we are shifting the power to First Nations people and changing the narrative of Pasifika people from mere victims of climate change to warriors of the Pacific.

“Love anyway. Love even though. Love just because.” - Anon I’ve been finishing year 12 this year whilst doing a Certificate II in construction training, and after I graduate my aim is to gain an apprenticeship to be a boilermaker. As part of the National Youth Week Film competition 2017, I was one of five young people invited to Melbourne for a filmmaking workshop. There I produced a short film about my life story and my passion for music and this was aired on SBS VICELAND and NITV. I really value staying positive and believe that you should never let someone else put you down. Being part of the YAN is an amazing opportunity for me, because I get to learn about leadership and advocating for young people whose voices are never heard enough in the community. I will help to empower them and stand by them so their voices can be heard.

“Negativity may knock at your door, but that doesn’t mean you have to
let it in.” - Anonymous I am currently studying a double degree in Law and Journalism, hoping to work in the human rights and refugee field. After watching my parents struggle with the repercussions of their journeys settling into Australia, I am adamant in working to ensure that immigrants and refugees are given the same opportunities as everyone else to exponentially grow. I am currently a part of the Global Youth Task Force with United Nations Women, where I represent Australia in the fight for gender equality across the globe. I further work with the Youth Affairs Council of WA as a Shout Out Speaker and as a youth consultant, delivering trainings to young leaders from refugee and migrant backgrounds to help them develop leadership skills.

“Happiness can be found in the darkest of times, if one only remembers
to turn on the light” – Albus Dumbledore I am a law graduate, Indian-born migrant and proud Tamil woman from Melbourne. I passionately use my lived experience in my position as a Youth Advisor at CMY and Create Change Fellow at Democracy in Colour to craft projects where community and identity are at the heart of everything. I recently founded The Vermilion Project, where I fuse my love for law, advocacy and community to promote the economic and social participation of people affected by menstrual health conditions and invisible illnesses. The Vermilion Project seeks to achieve this goal by promoting the use of targeted employment law resources, career advice, mentorship and diverse storytelling in workplaces, universities and schools. I am a 2019 Young Social Pioneer at the Foundation for Young Australians, and was most recently selected as a World Economic Forum Global Shaper in their Melbourne Hub. I am of Afghan Hazara Ethnicity and I am currently studying a Diploma of University Studies in Science at the University of Tasmania. I am passionate about volunteering and helping others, which led me to be a volunteer at the Migrant Resource Centre (MRC) North as an interpreter and helping drop-ins. I am a member of the Youth Advisory Network in MRC North and a MYAN member, as well as a member of Get Outside with Community Leaders program. Recently, I initiated a youth group Afghan Youth Association Network (AYAN) for young people in my community. I organise and plan events and recreation activities for them, such as International Women’s Day and Girl’s Day events, Sport tournaments and a Kite Festival. I am also a sporty person and play in a local futsal competition every Sunday night. Other hobbies of mine include travel, swimming and camping. 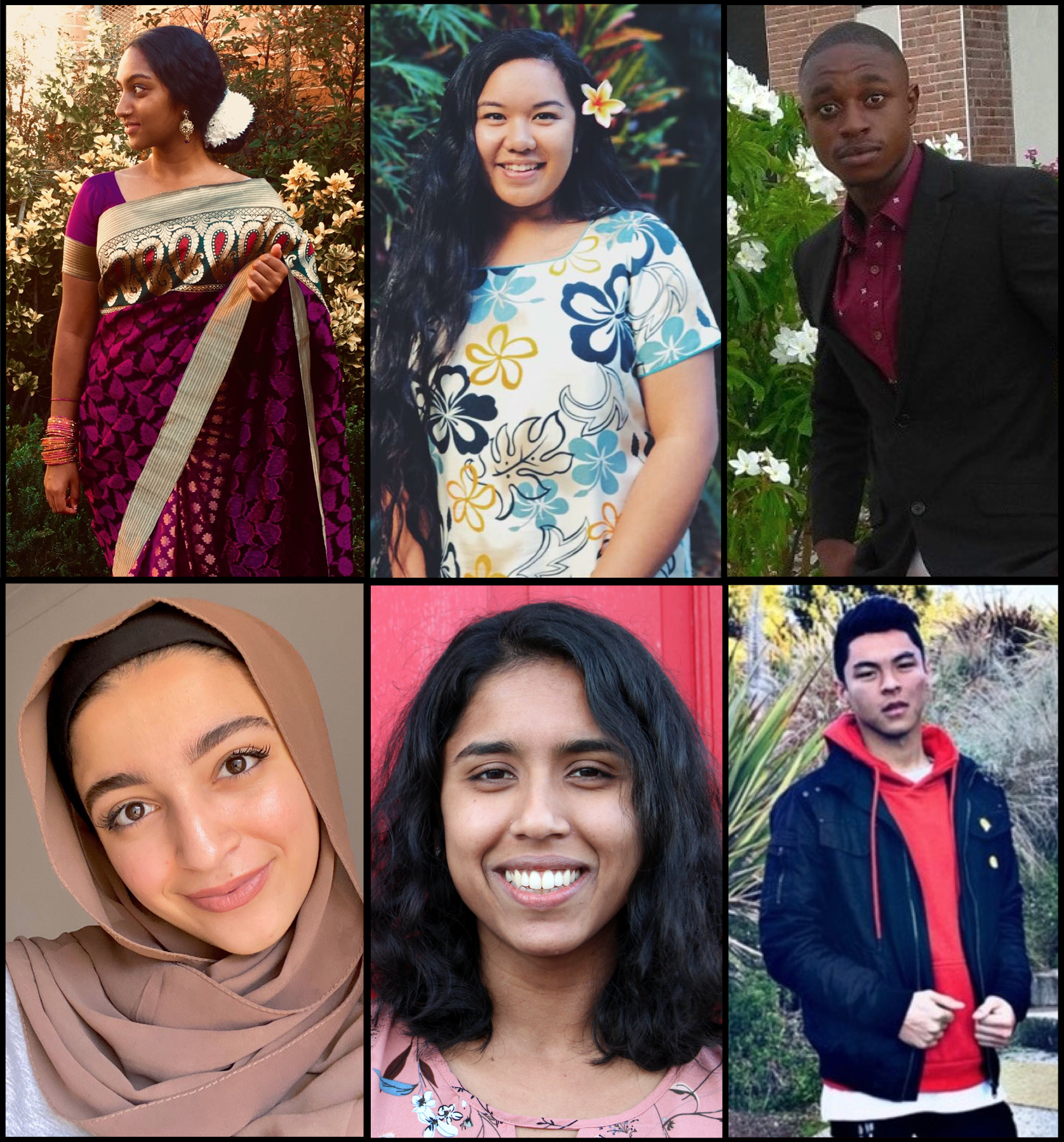 Get in touch with the YAN at myanprojects@myan.org.au

Why? MYAN sees the value of bringing emerging young leaders from across Australia together to connect, ignite and trailblaze.

What? Building on the success of the first and second FUSE event held in Sydney and Melbourne in 2014 and 2016, FUSE 2019 was held as a three day summit focused on building the leadership, advocacy and community organising skills of young people from refugee and migrant backgrounds.

Who? FUSE is targeted to young people who have some previous experience in leadership, advocacy and related activities, or who are looking for an opportunity to build these skills. 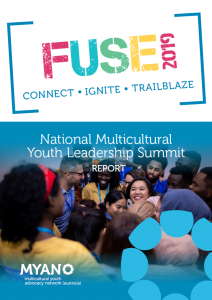 MYAN is excited to release a report on FUSE 2019. This year, FUSE once again delivered as a transformative 3-days leadership event – Australia’s only only national multicultural youth leadership summit. The Report highlights its panel sessions, workshops and the key recommendations of the final pitches to decision makers.

MYAN Space for Youth is an online group that is part of the Multicultural Youth Advocacy Network (Australia) – the national peak body on multicultural youth issues – Australia’s voice representing the needs and interests of young people from refugee and migrant backgrounds.

This group is for young people to connect with MYAN Australia for opportunities, relevant news and networks with other young people.

This scholarship supports a young person from a refugee background, aged 18-25, with demonstrated leadership and advocacy skills, to participate in the Annual Consultations between the United Nations High Commissioner for Refugees (UNHCR) and NGOs in Geneva, Switzerland, as well as meetings with high level UNHCR officials, government and other NGOs and engaging with UNHCR’s Global Youth Advisory Council. 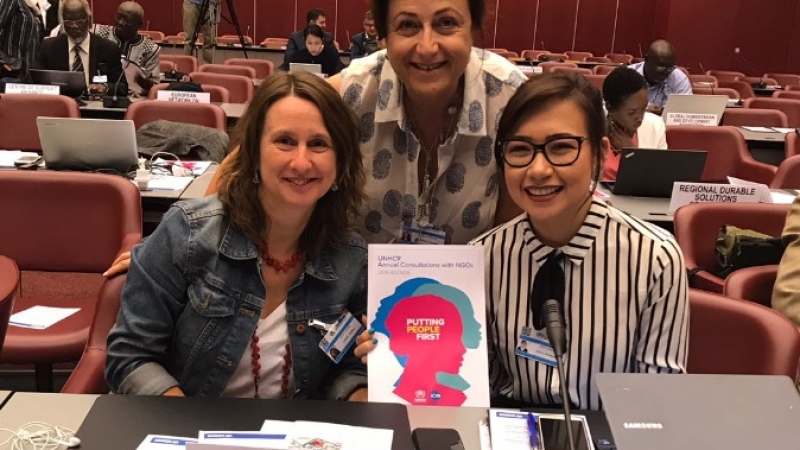 Shabnam Safa was the 2018 recipient of the MYAN Refugee Youth International Leadership Scholarship. Shabnam participated in the consultations and other bi-lateral meetings along with MYAN National Coordinator, Nadine Liddy, and  MYAN Chair, Carmel Guerra.

In two key plenary sessions, Shabnam asked Assistant High Commissioner for Protection, Volker Turk, about how the rights and capabilities of young people would be recognised in follow-up to the Global Compact on Refugees (GCR) and asked Assistant High Commissioner for Operations, George Okoth-Obbo, how young people as change makers can best be utilised on the ground in refugee protection. Shabnam also facilitated a session on day two of the Annual Consultations on Age, Gender and Diversity.

Apajok Biar was the recipient of the scholarship in 2017, speaking on a panel about the outcomes of the Global Refugee Youth Consultations in Australia.  Part of the Austrakan delegation to Geneva, Apajok had the opportunity to meet with senior UNHCR personnel and raise questions with the UNHCR High Commissioner about youth-focused protection and refugee youth participation.

Update Required To play the media you will need to either update your browser to a recent version or update your Flash plugin.

What are the Global Refugee Youth Consultations (GRYC)?

The GRYC was a joint initiative of the UNHCR and the Women’s Refugee Commission (WRC) in Geneva, Switzerland, supported by the Youth and Adolescents in Emergencies (YAE) Group.

In consultations across 22 countries between October 2016 and June 2016, 1,267 refugee young people participated to amplify youth voices in decisions that affect them.

The Australian consultations, which involved 555 young people – coordinated through a partnership between MYAN and RCOA – identified 11 key challenges and 32 key recommendations to act on in the Speaking Up report.

These consultations were seen as the beginning of a process – continuing to develop the leadership, capacity, and futures of refugee youth everywhere – and informed a Global Youth Workshop and the UNHCR-NGO Consultations.  Held in Geneva in June 2016, they attracted youth delegates from across the world who came to share the views and recommendations of young people consulted. Australia was represented by Arash Bordbar, Arif Hazara, Elizabeth Lang and Sarah Yahya. Read more here.

The GRYC Global Youth Workshop resulted in the development of 7 Core Actions for Refugee Youth and the global report, We believe in youth: Global Refugee Youth Consultation Final Report, which were launched in September 2016.  In December 2016 the delegates returned to Geneva to discuss plans for implementing these seven priority actions.

This report presents the ideas and recommendations of more than 500 young people from refugee and asylum seeking backgrounds who participated in consultations across Australia. The report is part [...] MYAN’s short film series was launched at the MYAN conference in November 2017. The short films capture young people’s stories and experiences of settling in Australia. Produced in partnership with Dr David Corlett, acclaimed filmmaker and host of SBS’ Go Back To Where You Came From, the  9 films feature young people from refugee and migrant backgrounds talking about leaving their country, arriving in Australia, what helped them settle in Australia, belonging, identity and aspirations for the future. These films are part of MYAN’s resources supporting the National Youth Settlement Framework.